The saying goes that if you want to understand someone, walk a mile in their shoes. So, is virtual reality the answ… https://t.co/csvDhP5GMk 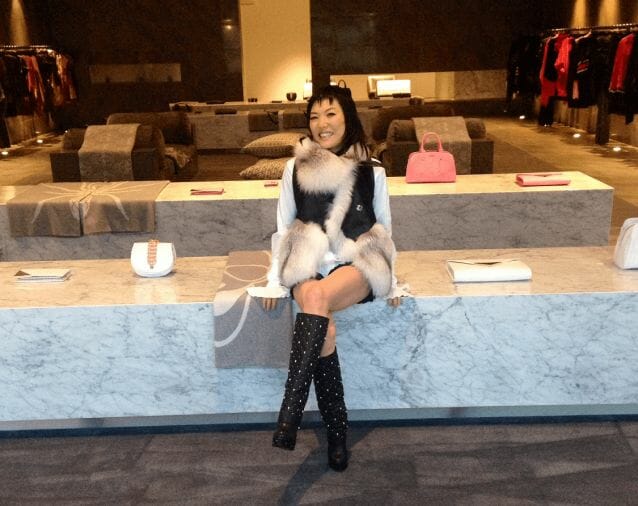 We’re just going to say it: Fashion executive Jene Park is a badass.

Jene, a native of Korea, wasn’t born into success. But she was born into a tradition of determination. She’s the daughter of a single mom who worked constantly — as in having only six days off a year.  “She sacrificed her life to raising her four children,” Jene says.

Jene came to the U.S. at age 29 and enrolled at Fashion Institute of Design & Merchandising in L.A. She was older than most of the other students, didn’t speak English and had no background in design or art. But she excelled, earning a scholarship to study in Paris. When she graduated, Jene’s mom traveled from Korea for the first time to hear her speech.

Jene then worked for a decade at BCBG Max Azria, where she rose from an unpaid intern to a key executive who helped guide the company to becoming a major global brand.

After the birth of her twin girls, Jene wanted more flexibility in her work life, so she ventured out to start her own company in 2005. The following year, she became COO of Thomas Wylde, a luxury lifestyle brand.

During a conversation at her L.A. home, she shared with us her pretty amazing and inspired life story. In it, we found lots of wisdom on how to succeed as a Creative Executive:

Learn from everything. The television show “Family Feud” changed Jene’s life. She taught herself English and about American culture, as well as the marketplace overall, by watching the 90’s version of the long-lasting American game show staple. “That was the most fascinating thing!” she says.

Later, in her years at BCBG, she had a bottomless curiosity about every aspect of the business.  “Learning from other people’s experience was priceless,” she says.

All that knowledge combined with hard work made her indispensable. “It’s never about getting the job; it’s always about keeping the job,” she says. And it got her ready to start her own business later.

It’s what you do and how you do it. At FIDM she learned that her success wasn’t just about grades on tests, but showing her instructors she was engaged — that she was listening and thinking about what they were saying. You don’t have to do everything perfectly in the classroom or the workplace. Showing that you care and genuine interest goes a long way, too.

Rejection isn’t the end. After fashion school, Jene landed a job interview at BCBG Max Azria, the company where she had dreamed of working. And then … she didn’t get it. Instead of giving up on her dream, she offered to work three months as an unpaid intern. That persistence led to much bigger things.

Process matters. There’s this misconception that creation is all about inspiration and artistry and lofty stuff like that, but it’s also about how the work gets done. When Jene started at BCBG, she performed tasks like fetching buttons, fabric and other items that designers needed to create a look. The problem was that none of this stuff was organized, and she was wasting time trying to locate the right items. Jene knew she could speed up the process with a better system. But there wasn’t any additional time during her workday to create it. So she started spending her evenings sorting all the supplies and when she needed something later it would take her two seconds to find it – not two minutes. And all those little extra pockets of time she saved helped more stuff get created.

Think beyond your job title. What drove Jene to spend her evenings sitting on the office floor sorting buttons? From Day 1 in her career, she has always made decisions based on one question: “What would I do if I owned the company?” And in those early days, the answer was getting those damn buttons straightened out. One night, an executive was also staying late and found Jene busy with her organization project. The two of them started talking about the buttons and eventually other ideas for improvements from Jene. Later, Jene was called into HR. She thought she was going to get fired for being in the design room after hours. But what she discovered instead was that the company was hiring her full time — with back pay for the time she’d already been working as an unpaid intern.

Let purpose – not people-pleasing – drive you. Her “What would I do if I owned the company?” mantra not only helped Jene think big and look for solutions: It also helped give her the courage to speak up for what was best for the company and not focus on pleasing others or playing office politics.

How to know if you’re in the right job. It comes down to a simple question, Jene says: Do the days fly by or drag? If you’re watching the clock, it’s time to get out of there.

Jene’s journey of grit, passion and curiosity fires us up to do more and create more — how about you? Our Creative Executive course can help.

PS We couldn’t possibly squeeze all of the goodness from our Jene interview into one post, so we’ll have more from her Monday.