Have you downloaded our virtual meeting handbook yet? It's going to help you save your executive function for the t… https://t.co/qVOA4MAHtT 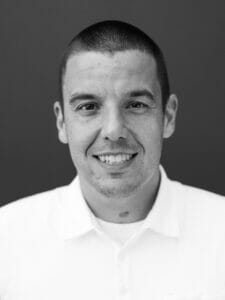 Great ideas can be fleeting, fragile things at first. They need a protector to grow and thrive — and sometimes even appear at all.

“Most of us have tons of great ideas throughout the day, but without a sounding board or platform, we may shrug off these ideas as whimsy,” says Aaron Burgess, director of content for the User Experience Design Group — and a protector of ideas — at PayPal.

Based in Austin, Texas, Burgess leads a couple dozen content designers and video producers and works with colleagues across six states and four continents. While he admits that he’s never really off the clock, he also points out that his “work rarely feels like work,” and that his life beyond PayPal includes skateboarding (“I think my wife and my knees would prefer I stuck to a safer form of exercise”), meditating, going for runs to the sounds of Minor Threat and Slayer and starting to make stuff again. He’ll tell us more about that in this Creative Leadership in Action interview, where he also delves into building culture, nurturing ideas and creativity and forgiving yourself.

What are the elements of culture that influence team most?

I’ve always found that the team’s makeup is what influences culture, and not the other way around. Even if the larger corporate culture is toxic or dysfunctional, you can create a highly functional and happy culture within whatever pocket of the company you oversee. And when you do, you need to hold onto that culture and guard it with your life.

The problem, of course, is that culture doesn’t seem like culture while it’s forming. It’s random, messy, unpredictable and rife with contradictions — just like the human beings whose spirits comprise it. The creative leader has to manage this adversity while guiding others through it, and to encourage and celebrate the touchstones that will ultimately define the team’s culture.

I’ll give you an example of a touchstone that, for my team, was a defining moment for our cultural mojo. Last year, one of our content designers started an email thread to the group talking about random acts of happiness. No agenda—just asking us to think about these moments in our own lives. She saw an amazing response, and what started as a thread morphed into a small but powerful project that found everyone on the team anonymously sending a small gift to someone else. Someone even gifted our VP, who was delighted by the gesture he never saw coming.

You can’t manufacture this sort of thing—but it’s a beautiful thing that has to be nurtured, and as our group’s leader, I’m happiest when I can help others nurture and own it.

What are the elements of culture that influence creativity most? What is imperative for great ideas to come alive?

Great ideas need a space where they can come alive. (Tweet+Share)  Play, curiosity, risk-taking and failure all need to be encouraged in this space. Opening this space can be anyone’s job, but the creative leader has to steward things once business is open. The creative leader also needs to be a beacon of hope, trust and mentorship within this space—which sometimes involves recognizing when the space itself isn’t enough.

Creative leaders need to give our people — and ourselves — permission to get selfish with this 24-hour gift we’re given each morning. I encourage my teams to take a hard look at their schedules and start making Sophie’s choices about what really matters. If they can fit these choices into the creative space they’ve been afforded at the workplace, great. If not, then I try to work with them to carve out creative space wherever they can find it.

So when I’m building a team, I look for people who are good at compartmentalizing and maximizing the time they’re afforded —or at least people who’ll be honest with me when work is infringing on their time to be creative.

What have you found to be most helpful when you are managing people who don’t report into you?

Learning to forgive myself for the consecutive failures that come with managing people who don’t report into me. Coming into this role not just as a first-time director, but also as a stranger to the team and the company, I threw a lot of stuff against the wall as I was finding my way, and I quickly learned that at this level, that’s about as much as you can expect to accomplish going in cold. No one looks out for the Creative Executive.

I also erred by being perhaps a bit too honest about my failures and shortcomings. Goal planning, for instance, is most effective when the goals are simple and clear; but coming into a group that’s historically faced a lot of challenges, I went big and broad at first and quickly learned it’d be smarter to slay three bigger dragons than to go after the whole colony. So that’s how I’m going into this coming year, and I hope to keep simplifying as I, and my team, grow.

I still believe in transparency—I don’t think I’m capable of acting otherwise—but I learned that those of us out in front have a responsibility to project confidence and clarity even when our inner voice is telling us to run. So I’ve changed my approach and, as I’ve worked with coaches of my own, I’ve relayed what I’m learning with those who report to me. It’s my hope that as I empower my reports to grow as creative leaders, they’ll empower the dozens of folks who report to them. But they’ll each do it in their own way, based on the unique needs of their people, so the light will refract in a unique and beautiful way that I alone couldn’t direct.

Please share a recent cultural challenge you or your team overcame.

Over the past year my team has made 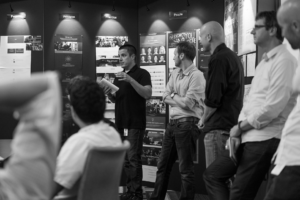 awesome strides in communicating and working outside of our respective product silos. When I started, I was amazed at how few of our content designers knew one another in more than a passing way, even though many of us work in the same buildings! My approach has always been to start with relationships, and then move into doing work, so that’s a value I tried to inject into the team, primarily through leading by example.

I can’t take all the credit for this, of course—for me, it was simply a matter of picking up on people’s yearning to bust silos and build stronger relationships, and either modeling good behavior or supporting the team as they did the same. But where we used to share knowledge through design specs and Box folders, today we’re doing more communicating, coming together through events both sanctioned and informal, and generally getting closer as people.

How do you stay inspired as a Creative Executive?

Lately, and I think this is the biggest transformation I’ve had since coming into this role—I’ve given myself time to start making stuff again. Jen once told me that when you graduate to Creative Executive status, it’s no longer about building a portfolio or having your name on deliverables. Your people are your deliverables—and if you’re used to making stuff, as Creative Executives likely are—that’s a major existential curveball to try hitting mid-career.

For me, accepting this as my new reality was stage one. Getting comfortable with it was the second, tougher stage, but the confidence that’s emerged from that has gone a long way toward building team morale. The final stage has simply been finding other outlets for my “maker’s mind.” I picked up my guitar again after years of telling myself I had “real” work to do. I stopped watching cooking shows to unwind and discovered the joy of cooking. I learned to channel my energy outside of work, and it’s given me more energy to bring back to work.